Provenance research on the sculptures of the Darmstadt Municipal Art Collection

The Institut Mathildenhöhe Darmstadt was founded in 1976 and is responsible for managing and maintaining the Darmstadt Municipal Art Collection. The collection currently comprises around 30,000 artworks of various genres from the era of Romanticism to contemporary art.

The aim of the research project is to do in-depth provenance research on 126 sculptures that were created before 1945 and were acquired by the Darmstadt Municipal Art Collection after 1933, the beginning of the Nationalsocialist era. The provenances of the 126 artworks are currently incomplete or completely unknown.
The majority of the artworks to be examined were acquired from private collections and from the art market between 1980 and 1996. The objects include bronzes, plaster and terracotta sculptures, marble sculptures, wood and stone sculptures, majolica and porcelain. Larger groups of artworks were created by members of the former Darmstadt Artists' Colony, such as Bernhard Hoetger (1874-1949), Ludwig Habich (1872-1949), Daniel Greiner (1872-1943) and Heinrich Jobst (1874-1943). The provenance of the artworks will be systematically researched for possible looted or confiscated objects during the Nazi persecution.
In addition, the institutional history and the former holdings of the “Galerie des 19. Jahrhunderts” (Gallery of the 19th century), which existed from 1992 to 1996, will be researched. During the initial provenance research project from 2017 to 2020 on the collection of paintings in the Darmstadt Municipal Art Collection, the founding of the gallery turned out to be a separate research topic that was initially unknown. The initial motivation to create a new art institution on the Mathildenhöhe was the purchase and restoration of the so called Deiters House, designed in 1901 by the head artist of the artist’s colony and architect Joseph Maria Olbrich (1867-1908), by the city of Darmstadt in 1988. After the restoration was completed, the new “Galerie des 19. Jahrhunderts” (Gallery of the 19th century) moved into the Deiters house. The gallery presented paintings from artists with a close connection to Darmstadt and aimed to show the contribution of these artists to 19th century landscape painting. But the gallery only existed until 1996, when it was closed. In order to present a high quality collection of paintings, the city of Darmstadt engaged from the mid 1980s until the early 1990s in an ambitious acquisition policy and bought numerous paintings. The accompanying gallery catalog lists 129 paintings that illustrate Darmstadt's contribution to 19th century art history. Apparently at least 40 paintings were newly acquired especially for the gallery. Most of them came from private collections as well as from the regional, national and international art market. The knowledge gained from the first provenance research project suggests that these paintings should be examined, too.
The results of the project will be presented on the website of the Institut Mathildenhöhe Darmstadt. In addition, a public conference is planned, in which results of the research project will be incorporated. It is also intended to integrate the results of provenance research into upcoming exhibitions. 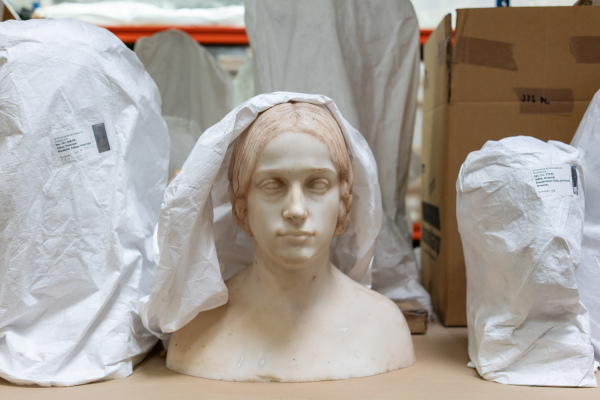